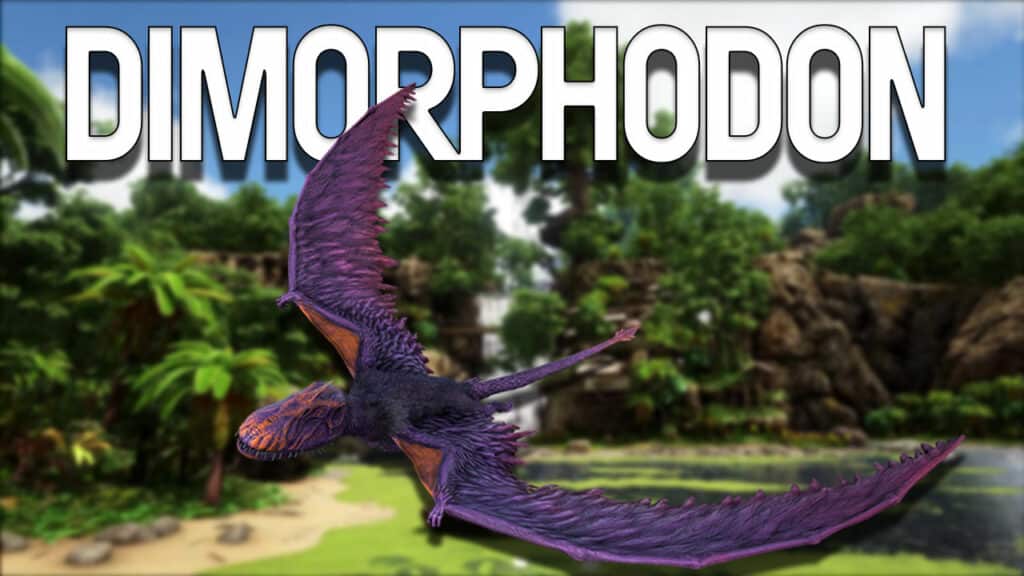 ARK: Survival Evolved: Dimorphodon – How to Tame, Feed and Breed!

The Dimorphodon in ARK: Survival Evolved is a small, feathered pterodactyl with a reptilian skull. Alone it is relatively harmless, but in a group or swarm it can become a threat to even the largest creature, with devastating proportions.

In our guide to the Dimorphodon, you will find out everything you need to know about the small pterodactyl. But also how to catch him, tame him, feed him, and breed offspring too.

This is the Dimorphodon in ARK: Survival Evolved

Appearance: The Dimorphodon is a small, feathered pterosaur, with a featherless reptilian head, bearing similarities to the island’s large carnivores. You can find it in shades of black and brown, as well as bright colors like red, green, or iridescent white.

Wild: A Dimorphodon rarely comes alone. Often he is in a group, or a pack, of two to five creatures. They will attack you in a pack as soon as you attack or provoke one of them. It can also happen that the small pack of Dimorphodons spreads into a swarm. In that case, even the largest creatures don’t stand a chance.

Domesticated: Due to its size, you can have the Dimorphodon sit on your shoulder, but you cannot ride it and rush it towards other creatures or players if necessary. If you have multiple Dimorphodons, they are particularly effective at attacking others. How to tame the Dimorphodon in ARK

Like its conspecifics Pteranodon and Tapejara, the Dimorphodon will occasionally land. When he’s on the ground, it’s easier to hit him with a tranquilizer dart, since he’s quite slow on his feet.

Tip: Throw a bola at him to lock him down if you’re not the best shot and missed him with the previous methods.

How to tame him: Once he’s unconscious, put meat in his inventory and feed it to him. The better the meat, the faster the taming. To keep the Dimorphodon down and the stun value up, it’s best to use the anesthetic or Narcoberries. As a rule, the Dimorphodon is tamed quickly and without further use of anesthetics.

How to Feed a Dimorphodon in ARK

Once you have tamed your Dimorphodon, it is important to know what it likes to eat. Dimorphodons are carnivores, which of course make the choice of food easier.

How to breed the Dimorphodon in ARK

The breeding interval of a Dimorphodon is 18 to 48 hours.

How to Hatch Eggs: If you have obtained a fertilized Dimorphodon Egg from a successful mating, hatching begins. For this, the ambient temperature of the egg should be between 35 °C and 38 °C and in the egg incubator at 37 °C. According to standard settings, the little Dimorphodon baby hatches after about 1.5 hours. After that, it takes about 2.5 hours of your attention, during which you keep putting food in its inventory.

Once it gains juvenile status, it can feed on its own. The entire ripening time takes about 1 day and 1.5 hours.