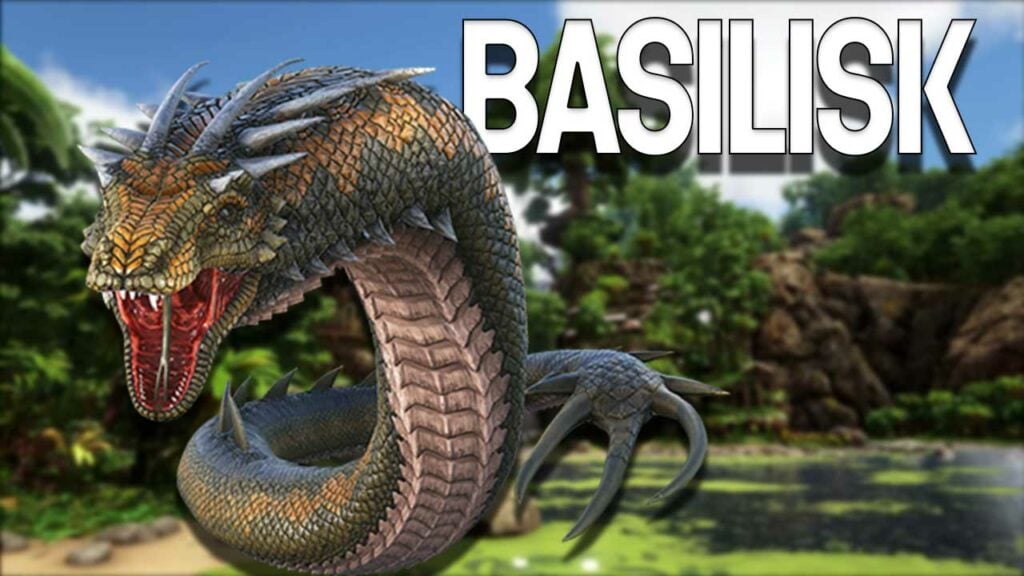 ARK: Survival Evolved: Basilisk – How to Tame and Feed!

At least since “Harry Potter and the Chamber of Secrets” we have known the Basilisk, which was introduced to ARK: Survival Evolved with the Aberration DLC. Here he has earned the place of the largest snake in the Ark, which luckily you can tame and ride too. With his long-distance attacks, he is an ideal long-range fighter.

In our guide to the basilisk you will find out everything you need to know about the well-known giant snake. But also how to tame him using fertilized eggs and feed him you should have been successful.

This is the Basilisk in ARK: Survival Evolved

Appearance: Like the Titanoboa, the basilisk is a giant snake, only significantly larger. Externally, however, it differs from this one. It has a tail that ends in three prongs, shovel-like spikes on the back of its body, and a head more dragon-like. The basilisk’s body is studded with diamond-shaped scales, as well as a few spikes and two horns, which it carries on the back of its head. Its mouth is full of sharp teeth, including two large fangs, with a snake-like tongue.

Wild: You will only encounter the basilisk burrowed. All you will see is its tail, which splits into three points, sticking out of the ground and if you’re lucky, even in time. If you’re not lucky, you’ve fallen into his trap like the prey he lies in wait for. When attacking, he spits a poisonous ball at you and his bites are also poisonous. Once he’s killed his prey, or in this case you, he burrows back in and waits for the next unsuspecting creature.

Domesticated: Even if the basilisk lays eggs, you cannot breed it, but you can ride it. Its ability to launch the poison ball over a long distance allows for long-range attacks, making it a combat mount. Direct attacks are also effective due to their poison, which gets into the victim when it bites. The Basilisk also has the special feature that it can burrow on command, even with you as a rider on top. You just have to be alert enough not to run out of oxygen. How to tame the basilisk in ARK

The Basilisk is passively tamed by throwing fertilized eggs at it. You should have plenty of the following eggs ready:

Once tamed, it will also eat meat and non-fertilized dino eggs.

Once you have prepared the eggs mentioned above, you can make your way to the basilisk. Before you go to him, kill all the creatures nearby so that the basilisk doesn’t get distracted and eat his fill of something else, he’s supposed to eat the prepared eggs.

As soon as you are near him, he will come out of his hiding place. If he doesn’t, and you’re on a mount, switch mounts until he reacts aggressively to one.

To make it easier for you, run in a big circle, dropping the eggs. The Basilisk will follow you and eat the eggs. Run this circle and throw eggs until you manage to tame him. Wear a gas mask to prevent the ball of poison the Basilisk spits from doing more damage to you.

How to make the Basilisk saddle

To craft the Basilisk Saddle, you need to be level 85 and 28 engram points to unlock the recipe. You now need the following resources to craft:

How to Feed a Basilisk in ARK

Once you have tamed your basilisk, it is important to know what it likes to eat. Basilisks are carnivores, which of course makes the choice of food easier.