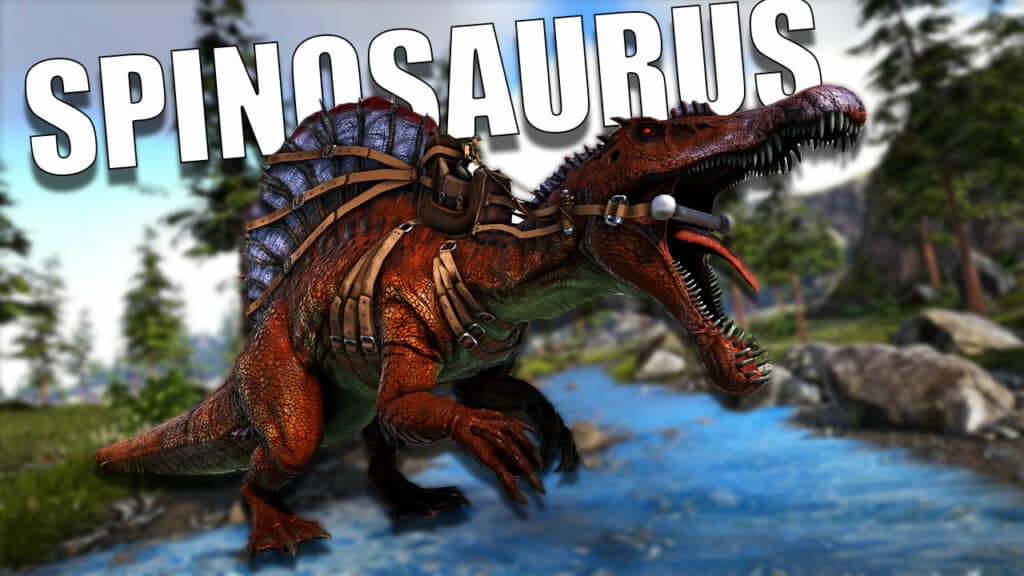 ARK: Survival Evolved: Spinosaur – How to Tame, Feed and Breed!

The Spinosaur made its big appearance in Jurassic Park III and is also featured in ARK: Survival Evolved. Its trademark: the huge back sail. Tamed, it is a useful mount that can be used on land or in the water. It can be found in rivers and lakes throughout the Ark.

Find out everything you need to know about the famous carnivore in our Spinosaur guide. But also how to catch him, tame him, feed him, and breed offspring too.

This is the Spinosaur in ARK: Survival Evolved

Appearance: You can recognize the Spinosaur immediately by its distinctive huge back sail, which has a different bright color on each specimen. On its head, with the crocodile-like, elongated snout, it has a small, plant-like crest that extends down the neck and ends just short of the huge dorsal sail. He also has small fins on his arms and legs. Its arms are large and strong, ending in sharp claws, allowing it to walk on four or two legs.

Wild: Spinosaurs usually live near rivers or lakes and rarely stray from them. So if you ever come face-to-face with a Spinosaur by the river, all you have to do is get far enough out of its territory, or far enough from its water source, and it will stop chasing you. In addition, he is very easily distracted by other creatures. So he stops attacking you when he sees new prey. When fleeing, it is wise not to take refuge in the water, as the spino is a fast and good swimmer. If you didn’t manage to escape, he will attack you tooth and claw. Due to its size and dorsal sail, spinosaurs can usually be seen from a greater distance and can avoid encounters.

Domesticated: When tamed, the spinosaur is a useful mount, being quick on all four legs and great at swimming in the water. Because it can stand up on two legs and also attack with its long arms, it also offers the possibility of using it effectively in combat or for defense. How to tame Spinosaur in ARK

How to hunt the Spinosaur: The easiest way to tame a Spinosaur is to set several bear traps around you and lure them into them. Once he’s pinned down, smack him with the tranquilizer darts.

If you have leveled up enough stamina and speed, you can of course run away from him and shoot tranquilizer darts at him again and again. Since the Spino isn’t the fastest on land, this method can work, although it’s not always the best choice. Shooting him down from a cliff would be smarter.

The safest way is to build a trap for him like the Giga out of three Dino stone or metal archways. Set up the gates in a square shape and place a bear trap or two in the middle. Make sure you always leave a little space between the goals. Since the Spinosaur is significantly smaller than the Giga, you need to use gates here. Close all gates except the two you escape through. You may have to put walls on the gates so that Spino doesn’t climb over because he can climb about two walls.

Now you lure Spino in. You provoke him into following you. The important thing here is that you have a faster mount or a very high movement speed so that you can also escape. Make sure he doesn’t get distracted by other critters/creatures, as this can easily happen. If he follows you, run through the open gates of your construction – but don’t step into the bear trap yourself.

Once the Spinosaur is stuck in the bear trap, close the two open gates and shoot it with tranquilizer darts until it is knocked out. You can easily do this through the gaps you left between the gates. Depending on the Spino’s level, this may take some time and resources.

How to tame him: Once he’s unconscious, put meat or kibble in his inventory and feed him that. The better the meat, the faster the taming, but the most effective is the Kibble. To keep the Spinosaur down and the stun value up, it’s best to use Narcoberries instead of the anesthetic.

How to make the Spinosaur saddle

To craft the Spinosaur Saddle, you need to be level 71 and 40 Engram Points to unlock the recipe. You now need the following resources to craft:

How to feed a Spinosaur in ARK

Once you have tamed your Spinosaur, it is important to know what it likes to eat. Spinos are carnivores, which of course makes the choice of food easier.

How to breed the Spinosaur in ARK

The breeding interval for a Spinosaur is 18 to 48 hours. How to Hatch Eggs: When you get a fertilized Spinosaurus egg from a successful mating, hatching begins. For this, the ambient temperature of the egg should be between 30 °C and 32 °C. According to standard settings, the little Spino Baby hatches after about 4 hours. After that, it takes about 7 hours of your attention, during which you keep putting meat in its inventory.

Once it gains juvenile status, it can feed from troughs on its own. The entire ripening period lasts about 2 days and 23 hours.