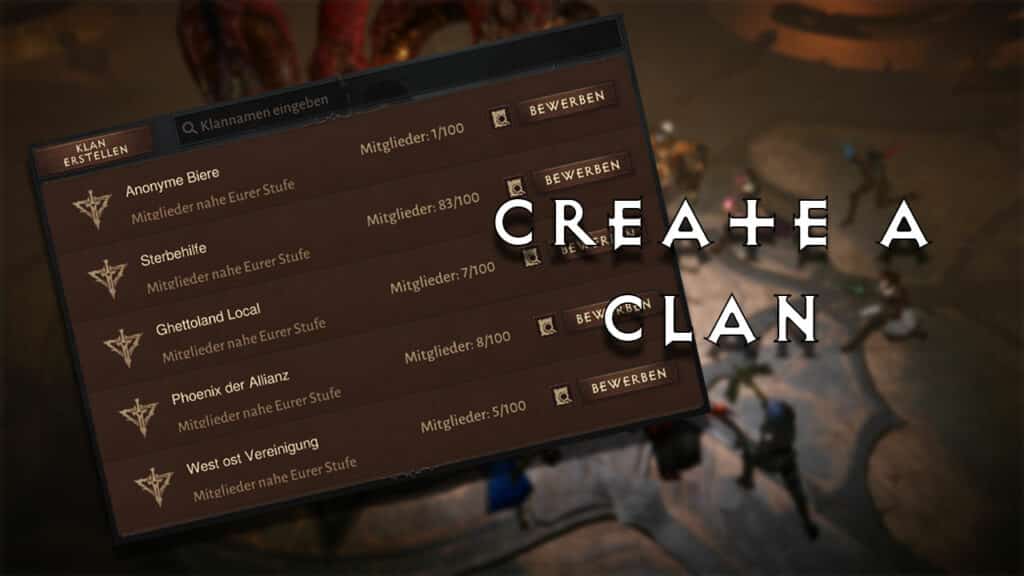 Diablo Immortal Clans: How to Create or Join Them

In Diablo Immortal, you can either shred your way through the enemy monster hordes alone or join forces with other players in a clan. Our guide shows you how to join a clan, create your own clan, and what dark and immortal clans are all about.

Why Clans Matter: Clans are an important element in Diablo Immortal for a number of reasons. If you are a member of a clan, you can exchange information with other players quickly and easily, for example, if you are stuck in a quest or have specific questions about items or the crafting system.

How to create a clan in Diablo Immortal

Basically, every player can create a clan. However, you first need 3,000 Platinum Coins, one of the premium currencies in the game, and level 30 on your character. Then, once you’ve completed the quest “Open the Way” from the Wanted Poster Board, creating a clan is easy. What you need to do:

As the founder, you also determine who becomes a member, which rules apply within the clan, which player receives which rank, and what goals your clan pursues. The number of members in a clan is limited to 100.

Join a Clan in Diablo Immortal

Founding and leading your own clan requires a lot of commitment and time. It is more convenient to simply join an existing clan. All you have to do is go back to the clan details via the main menu, where all clans are displayed. After clicking Apply, all you have to do is wait for the founder to accept your request. Attention: The clans in Diablo Immortal are not to be confused with the so-called troops. Troops are like clans for a certain period of time. Up to eight players can team up in a troop to complete one or more dungeons or other challenges. The troop is usually disbanded afterward.

Dark Clans and Immortal Clans – This is the Shadow Lottery

Later in the game, clans have the opportunity to join the shadows and become a dark clan. The Shadows are one of the three factions in the game. Participation in the Shadow Lottery is required to join the Shadows. The Shadow Lottery takes place daily at 12:00, 18:00, and 21:00 server time. To do this, speak to the patron in the tavern in Westmarch. With a bit of luck, he will invite you to fight three bosses in the back room of the tavern. If you defeat all three of these old champions, you become a part of the shadows.

You can then take part in the Shadow Lottery as often as you like. In the second participation, after defeating the three champions, you will receive the item Akeba’s Signet, with which you can bring other players directly into the shadows. Now you can create a dark clan and use it to earn the title of Immortal Clan in the Cycle of Strife. Every Clan-Member needs to be at least level 43.

In the Cycle of Strife, Dark Clans can advance through various quests into the top ten Dark Clans. They then fight in a PvP event for the title of an Immortal Clan, which brings a variety of rewards and benefits, such as participation in exclusive raids.