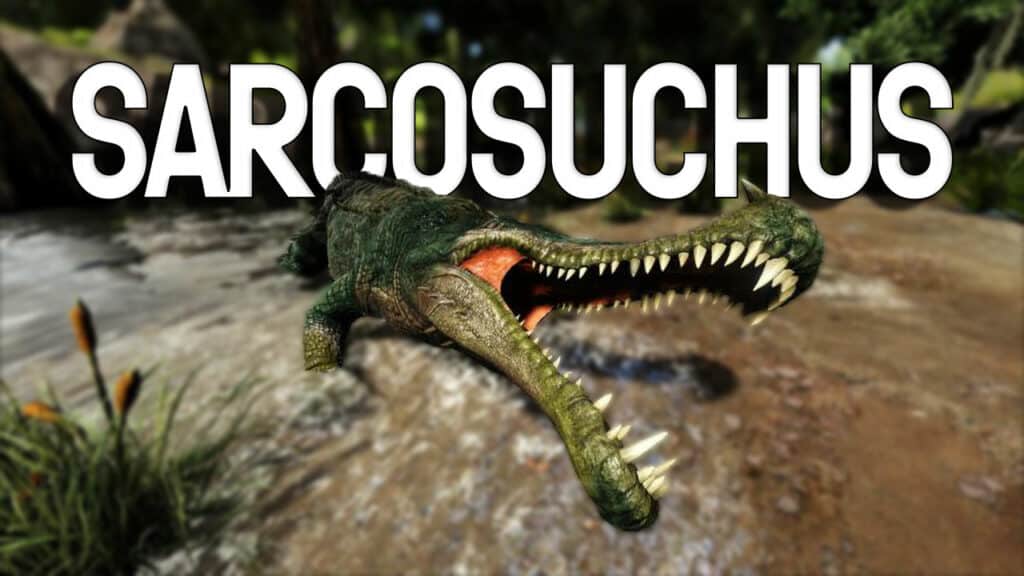 ARK: Survival Evolved: Sarcosuchus – How to Tame, Feed and Breed!

The Sarcosuchus is a giant primeval crocodile in ARK: Survival Evolved. You will usually find it lying in the water waiting for prey, and rarely on land. Tamed, it is rideable on land and in water, with speed in water far exceeding that of land.

In our guide to the Sarcosuchus, you will find out everything you need to know about the primeval crocodile. But also how to catch him, tame him, feed him, and breed offspring too.

This is the Sarcosuchus in ARK: Survival Evolved

Appearance: At approximately 45 feet in length, it is the larger relative of Kaprosuchus and one of the largest crocodile species in ARK. It has almost all the visual features of a modern-day crocodile, except for its large snout, which is not quite as pointed.

Wild: The Sarcosuchus can be found alone or in packs, spending most of their time lying in the water waiting for their prey to approach. If the hunger is too great, you may also meet him on land. He’s a lot slower there than in the water, where he’s really stepping on the gas, which is why you should never, never, never flee into the water when you meet him. By the way, a boat is also a bad idea as they can reach you there. Once he sets his sights on you, he will try to chase you down for as long as he can.

Domesticated: While the Sarcosuchus would not win a speed award on land, it is all the faster in the water. High level, he is ideal for exploring the ocean, the sea, the rivers, or the ponds in Ark and farming the resources there. How to tame the Sarcosuchus in ARK

How to hunt the Sarcosuchus: The best way to safely tame the Sarcosuchus is to stand on a high rock, cliff, or large tamed dinosaur. Once you are at a safe height, shoot tranquilizer darts at him until he is KO’d.

Since he’s pretty slow on land, you can run away from him and keep shooting him. Under no circumstances should you walk into the water. There he is much more agile and gets you faster than you can see.

How to tame him: Once he’s unconscious, put meat or kibble in his inventory and feed him that. The better the meat, the faster the taming. To keep the Sarcosuchus down and the Stun value up, it’s best to use the Narcotic or Narcoberries.

How to make the Sarcosuchus Saddle

To craft the Sarcosuchus Saddle, you need to be level 35 and 15 engram points to unlock the recipe. You now need the following resources to craft:

How to feed a Sarcosuchus in ARK

Once you have tamed your Sarcosuchus, it is important to know what it likes to eat. Sarcos are carnivores, which of course makes the choice of food easier.

How to breed the Sarcosuchus in ARK

The breeding interval for a Sarcosuchus is 18 to 48 hours. How to Hatch Eggs: If you have obtained a fertilized Sarcosuchus egg from a successful mating, hatching begins. For this, the ambient temperature of the egg should be between 30 °C and 34 °C and in the egg incubator at 32 °C. According to standard settings, the small Sarcosuchus baby hatches after about 2.5 hours. After that, it takes about 4.5 hours of your attention, during which you keep putting food in its inventory.