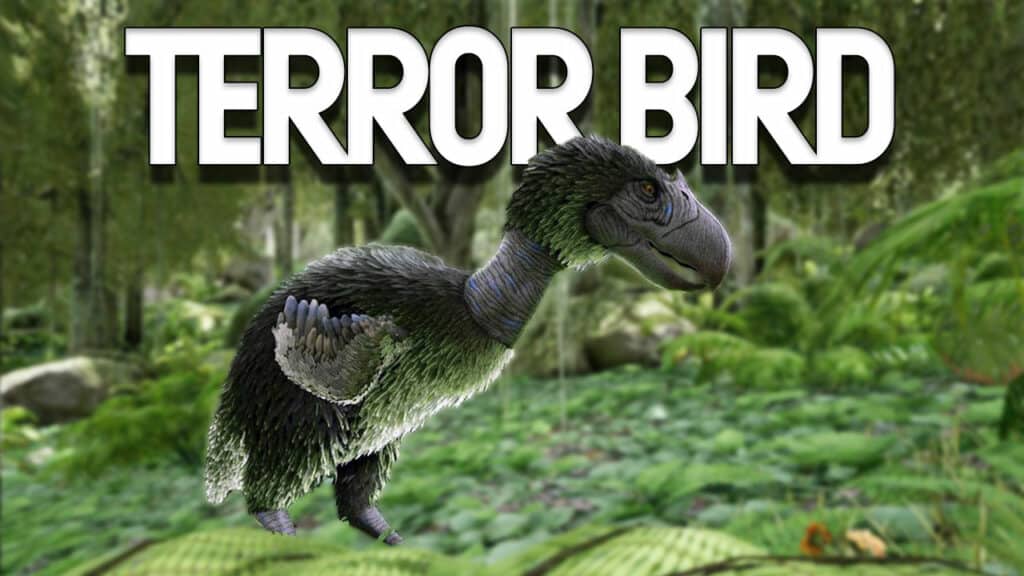 The Terror Bird in ARK: Survival Evolved is a fast, aggressive, and carnivorous bird that cannot fly due to its stunted wings, but is all the faster on foot. Tamed in packs, they’re particularly effective at killing off other players or creatures or at least doing some real damage and annoying.

Check out our Terror Bird guide for everything you need to know about the bird. But also how to catch him, tame him, feed him, and breed offspring too.

This is the Terror Bird in ARK: Survival Evolved

Appearance: The Terror Bird is one of the smaller carnivores in Ark, ranging in size from 8 to 15 feet. In addition, this bird has rather stunted “wings” that it uses to help itself land if it falls off a cliff. But he can’t really fly with it. In contrast to its wings, its legs are large and muscular. The Terror Bird’s appearance is rounded off by its large beak, which converges into a hook at the tip.

Wild: Terror Birds are pack animals that usually travel in packs of three to four individuals. They attack everything in their field of vision. You will often only notice them if they attack you at once. Because of its speed, the Terror Bird is super annoying as a wild animal as they really come from anywhere, anytime.

Domesticated: You can use it as a fast mount that you can even ride armed. However, it is most effective in a tamed pack, where absolutely everything can be destroyed. How to tame the Terror Bird in ARK

Once you’ve pinned him down, keep shooting him until he’s unconscious.

Important: If you see a Terror Bird alone and incapacitate it, keep in mind that its pack can still be nearby and attack you at any time. So always keep an eye on the surroundings.

How to tame them: Once he’s unconscious, put meat or kibble in his inventory and feed him that. To keep the Terror Bird down and the Stun up, it’s best to use the Narcotic or Narcoberries. The Terror Bird’s stun value goes down pretty quickly, so be prepared.

How to make the Terror Bird saddle

To craft the Terror Saddle, you need to be level 30 and 15 engram points to unlock the recipe. You now need the following resources to craft:

How to feed a Terror Bird eats in ARK

Once you have tamed your Terror Bird, it is important to know what it likes to eat. Terror Birds are carnivores, which of course makes the choice of food easier.

How to breed the Terror Bird in ARK

The breeding interval of a Terror Bird is 18 to 48 hours. How to Hatch Eggs: When you get a fertilized Terrorbird Egg from a successful mating, hatching begins. For this, the ambient temperature of the egg should be between 20 °C and 28 °C and in the egg incubator at 24 °C. According to standard settings, the little Terror Bird Baby hatches after about 2 hours. After that, it takes about 4.5 hours of your attention, during which you keep putting food in its inventory.