The co-op survival game Valheim is very popular on Steam. In this Valheim beginner’s guide, we’ll show you how to survive the first few nights & the basics of building a base.

What is Valheim? Valheim is a Viking survival game that recently launched on Steam. The game is already one of the most played games on Steam. At the moment there are 72,000 players at the same time. In order to give the newcomers a real chance, we have written a starter guide to help them survive the first few nights.

How to survive in Valheim – everything you need to know

How to start the game: When you start Valheim for the very first time, as in many other RPGs, you will be greeted with character creation. Here you can roughly put together your own Viking.

If you click on start, you will wake up inside a stone circle. Here you will start over with each death. This is true at least until you have set up your own bed.

At the edge of the stone circle you should be able to spot the raven Hugin, who gives you important information right at the beginning. Next to Hugin there is also a red stone that shows where you are on the map when interacting. Off the stone you open the map with the “M” key. Other key combinations are: 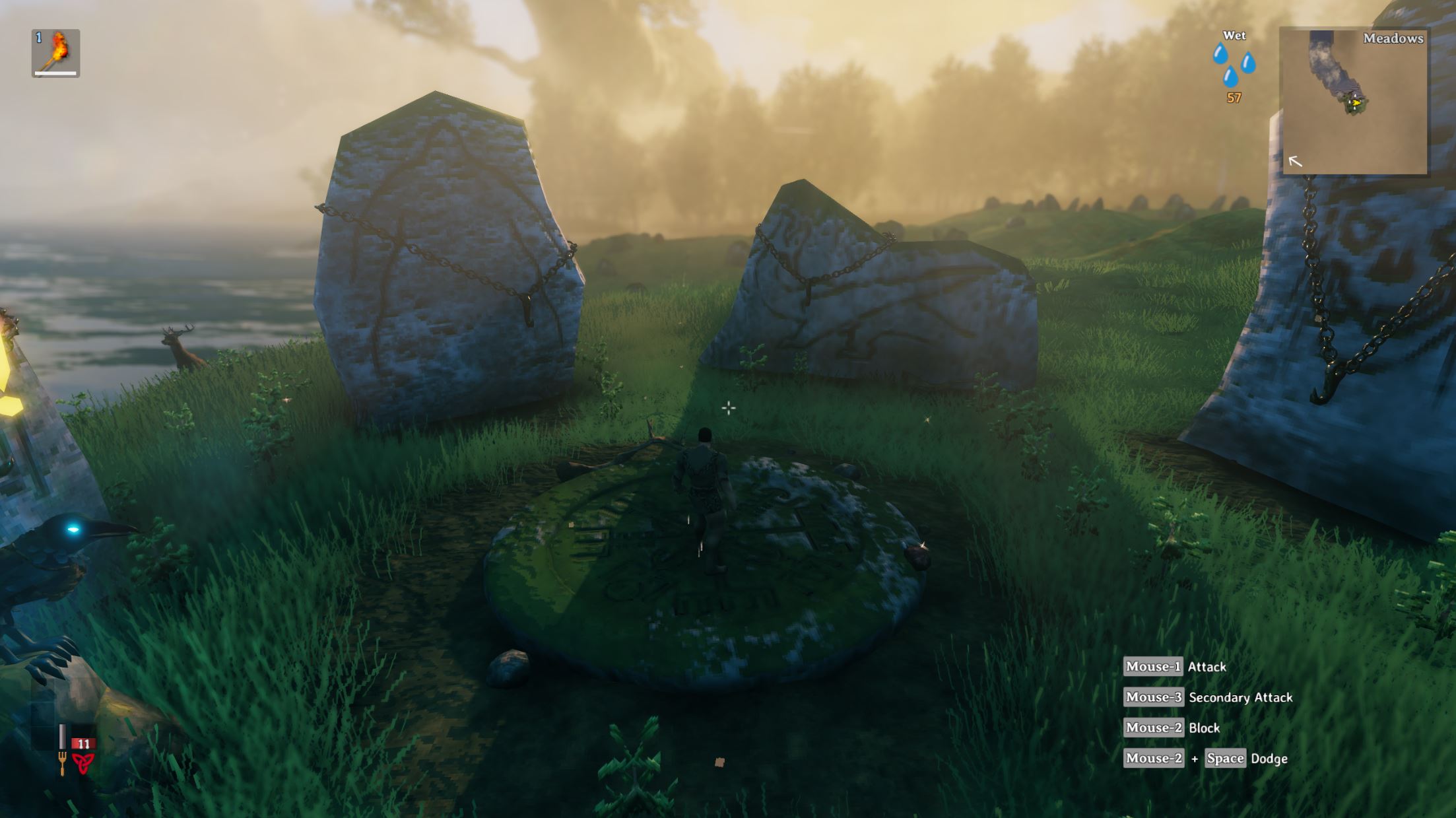 What to do at the beginning: Valheim, like other genre representatives, begins with you going into the world completely starved and naked. In the case of Valheim, this is of course the life after, because your character is already dead. By defeating 5 bosses, you get the favor of celebrating at the table in Valhalla! Now we will show you in the Valheim Beginner Guide where you can find food and other raw materials.

There is food here: In Valheim you better not rush straight into the first enemy or the first wild animal. These will not quite so literally tear you apart in the proverbial air, especially at the beginning.

So you should approach the subject of food as a collector rather than a hunter, but we’ll get to that later. Your first sources of food are therefore plants, of which you should discover two variants after the first few steps. On the one hand there are raspberries and on the other hand mushrooms. You will also need the latter later to tame and breed wild boars. 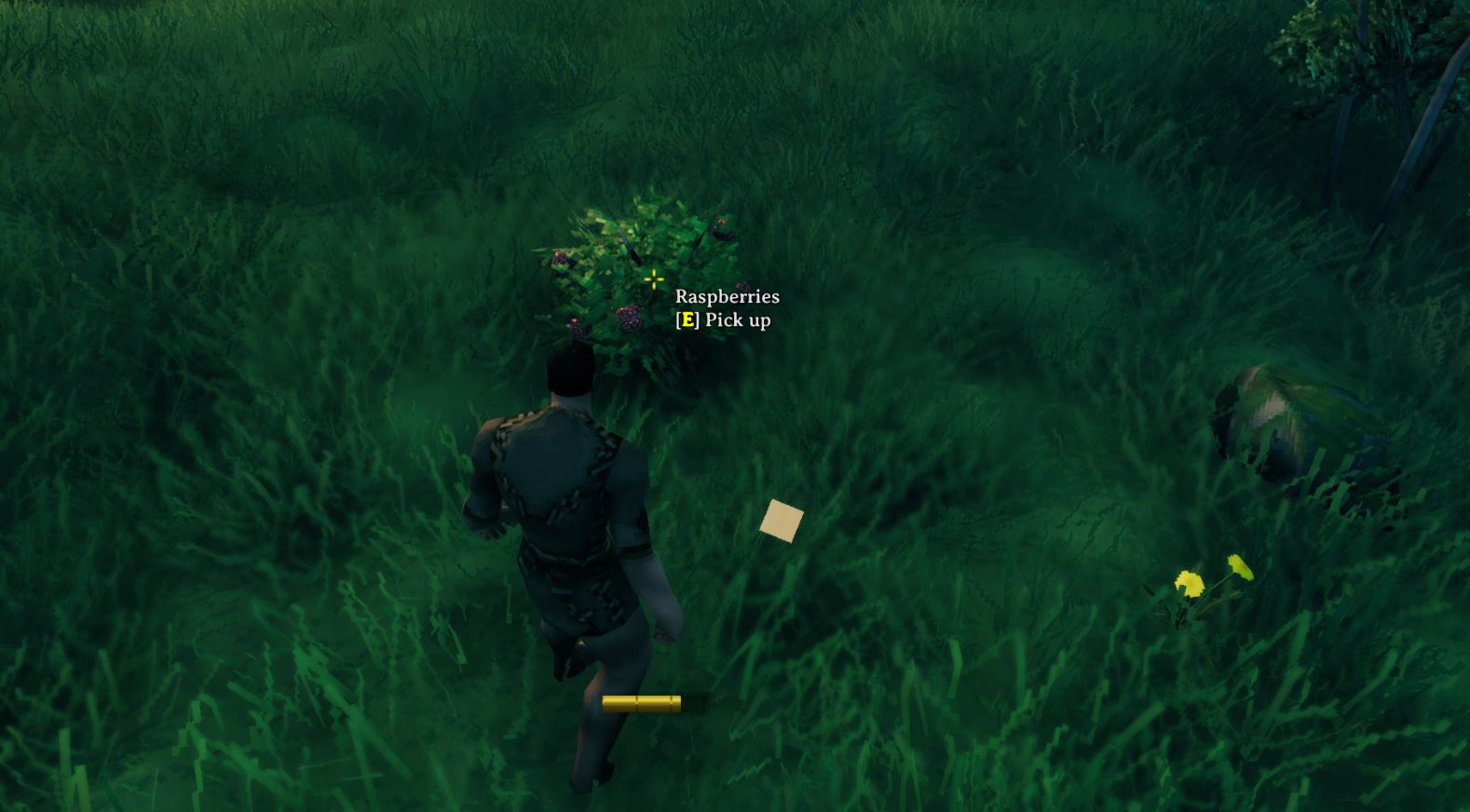 Not just food: In Valheim you have to find not only food but also other resources with which you can take on the fight against the bosses. This includes stones, wood and various metals. The first two are sufficient for this Valheim beginner guide.

Since you don’t have any tools at the beginning, you have to get your resources elsewhere. Now and then you will find deserted places in the forests that enrich you with raw materials: 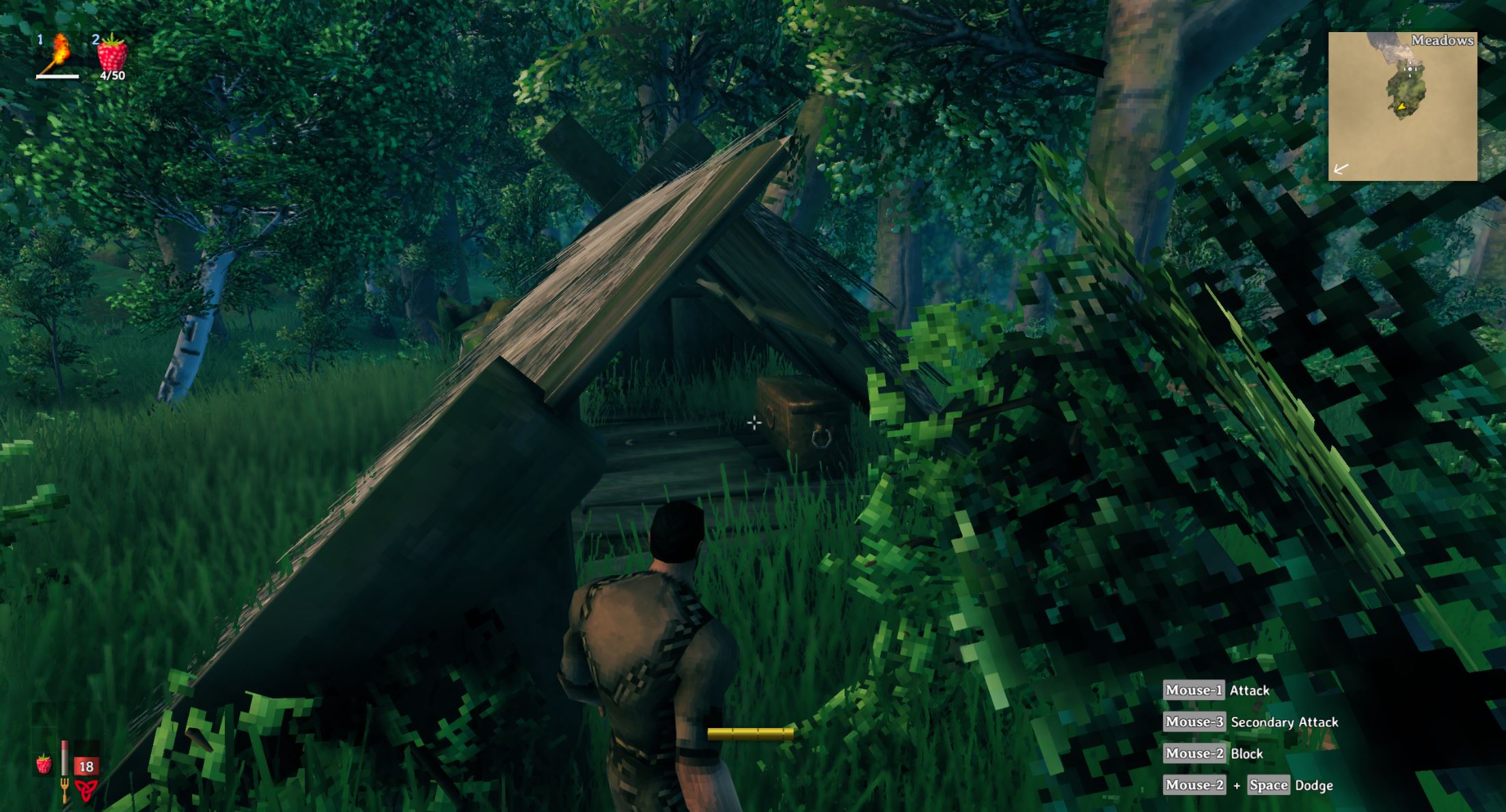 How to craft: In our Valheim Beginner Guide we concentrate on the basics. So, so that you don’t just make piles of wood and stone, you should be familiar with the basics of crafting in Valheim. To make something from the resources, you just have to open the inventory with “TAB”. On the right side you will then find the crafting menu.

Only a few recipes are currently displayed here. To get started, you’ll want to make an ax, pickaxe, and hammer. While the purpose of the first two tools is self-explanatory, you need the hammer to unlock further recipes!

You can use it to set up a workbench, for example, which you can use to unlock construction plans again. 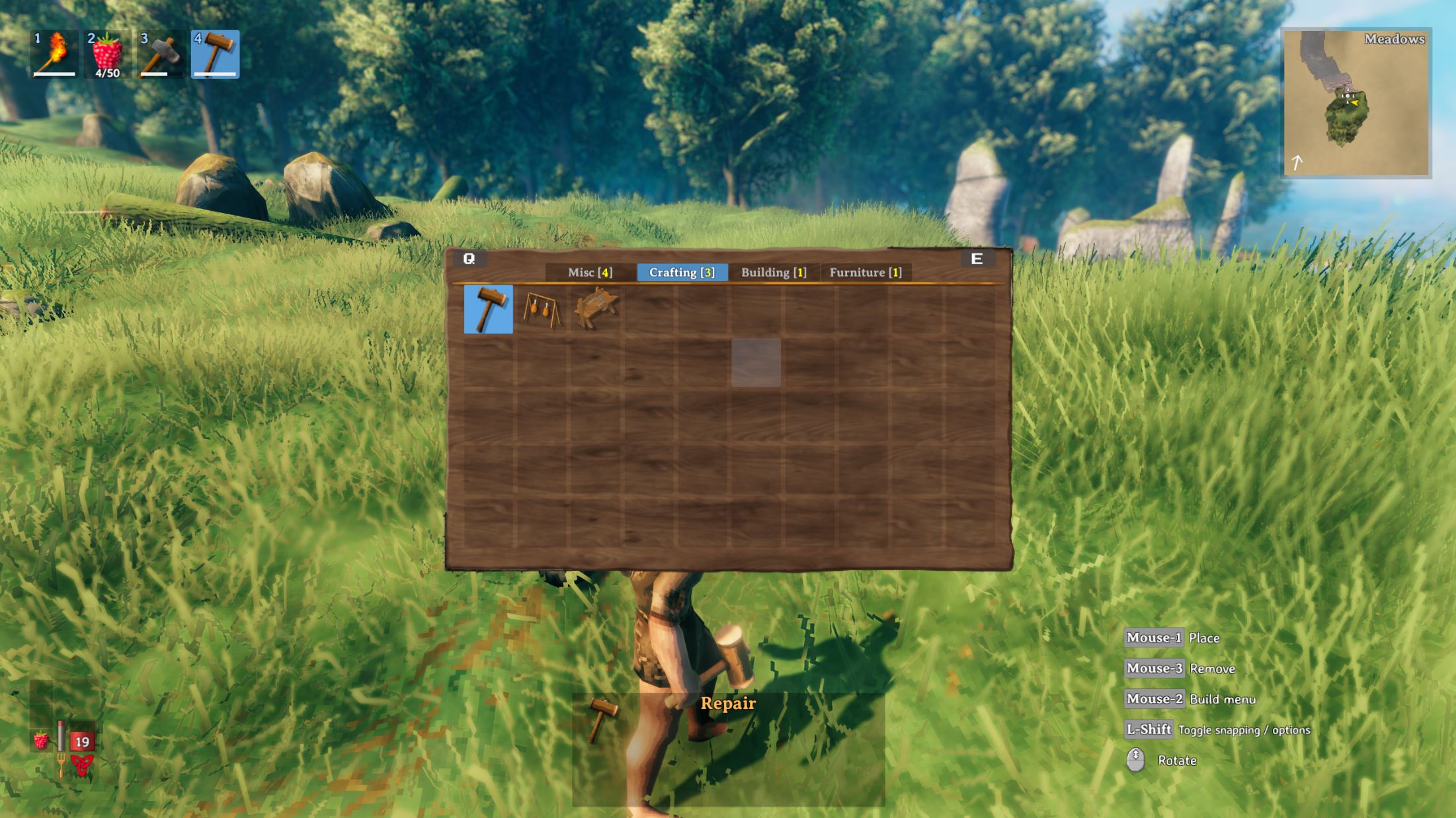 Build a first base & survive the night

This is how the workbench works: As already mentioned, you have to make a hammer, which you then use it build a workbench. Once you’ve done that, you won’t be able to use this workbench. Valheim demands that it be covered.

So you first have to build a small shelter for your workbench. But make sure that you really use a roof as the roof! It is not enough to use a floor as a roof.

You should now be able to use all of its functions: 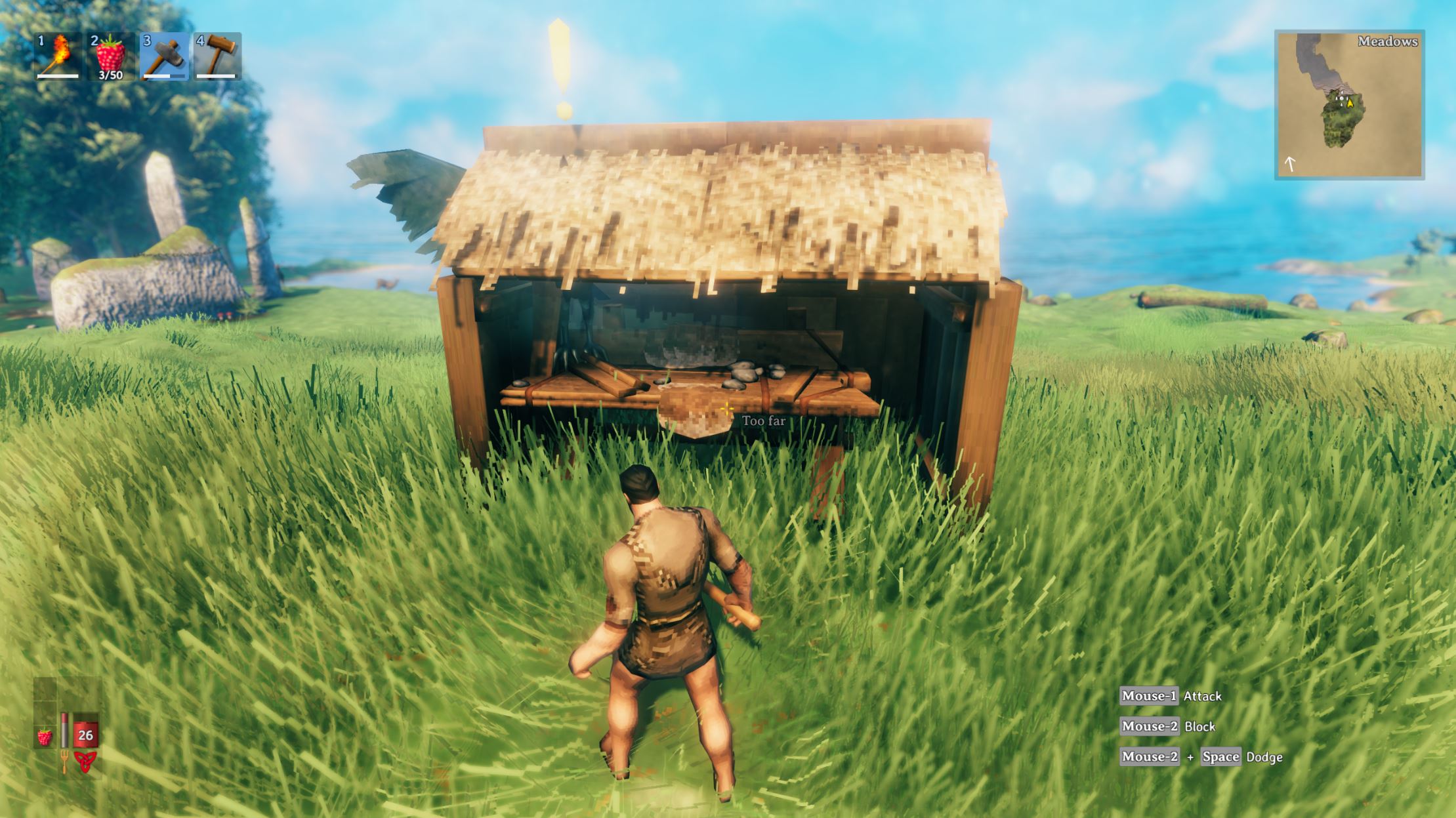 This is how you build a basis: Valheim is not reinventing the wheel again and follows the motto: “Well copied is better than badly made yourself”. Because building bases follows the principle of ARK. Raw materials have to be collected and then processed into walls, floors, doors, roofs etc. in the crafting menu.

Then you place the walls on the floor. Unlike in Ark, these do not have to be placed on foundations. You can build anywhere you want. The abandoned huts that we talked about at the beginning are ideal for a cheap starter base.

Survive the night: The base protects you from wild animals and opponents. But to protect yourself from Mother Nature and her relentlessly cold nights, you should start a fire.

If you are cold, you can see it in the toolbar at the top right next to the mini-map. If you place a fire, the symbol changes from “Cold” to “Fire” and you get warm. Later on, sturdy clothing should also help you against the weather. 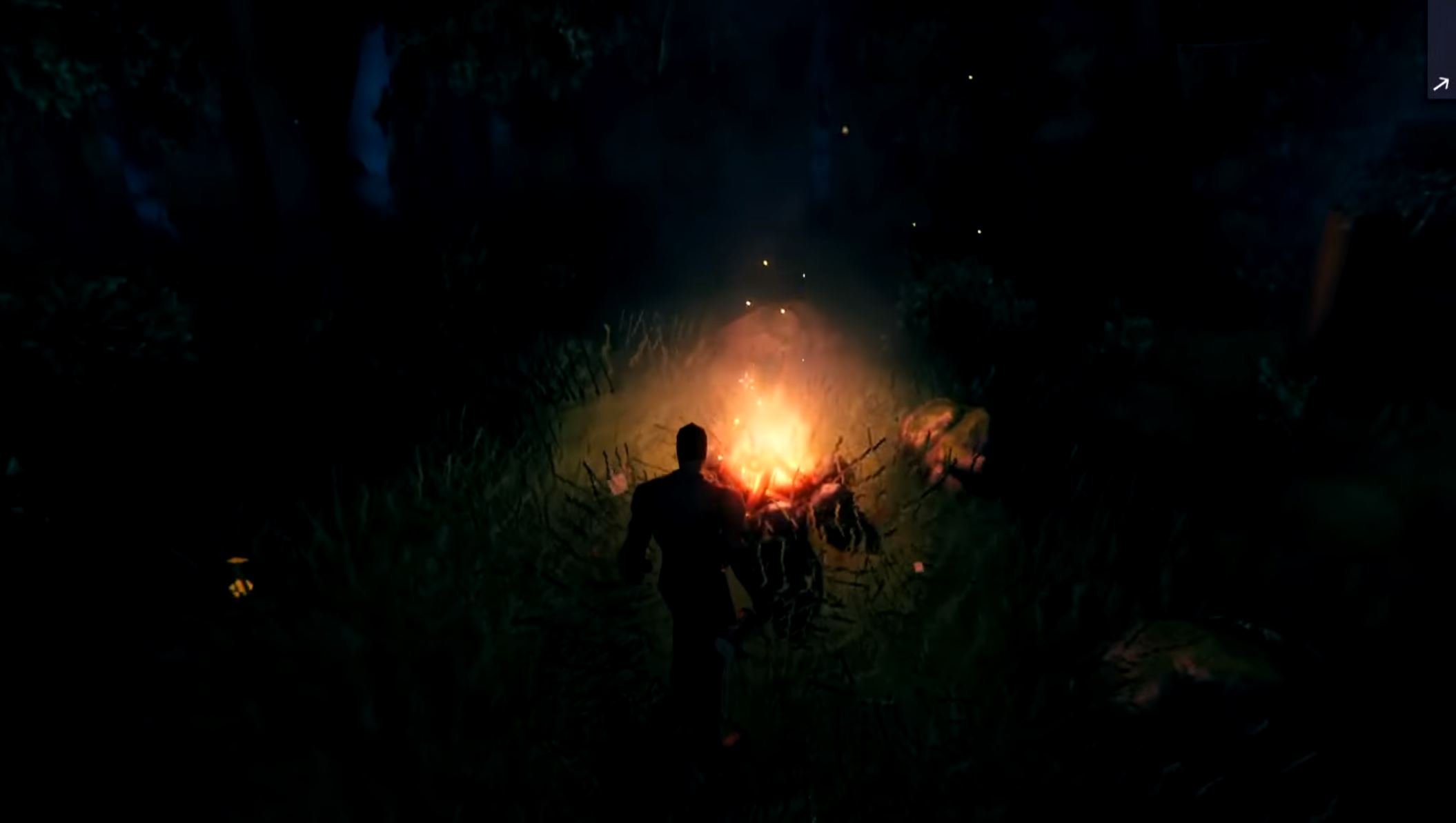 Complete us! Have we forgotten something that new players should urgently know about their start in Vahlheim? Let us know that and more of your tips. Leave a comment or follow us on Facebook to comment and discuss with the community.

Valheim: How to make potions and mead for resistance and health

Valheim: How to get the wolf armor and how to manufacture it

Valheim: All cheats and console commands for server hosts

Valheim: Where to find “fine wood” & how to get it